A fourth blog has arrived, hopefully followed by a fifth.

To anyone who has continued reading up until now, thank you so much! Blogging is such a new thing to me which makes it a fantastic learning experience and I hope that others are able to get something out of it as well, no matter how vague.

In the third part of A CERTAIN WAY TO MAKE A SHORT FILM series, pre-production was coming to a close and the production phase of this project was about to begin. This is the Day of Filming.

“Where to begin?” – First thoughts run through my head. “What needs to be done? Is everything prepped? Are we good?” Hopefully the answers to those questions are positive.

This is it. The shoot. Everything has been prepped and cast and crew are meant to meet at the set at 8:00am sharp. The cast and crew for Talking Myself to Sheep is actually fairly small so only a handful of people need to arrive. These are: the actor, director, sound recorder, and a grip. As director and producer of this film, it is up to me to make sure that everybody arrives on time and has a pleasant enough working environment to allow them to excel at their respective jobs.

To make things go smooth, it is advised that food is provided to whomever you have helping you on set. If someone is dedicating their time to help your silly project about talking sheep, be sure to feed them, they deserve it.

Along with the food, it is also advised that a director go over the day with these individuals and give them a run down of how the shoot is expected to go. This involves the schedule, and the tone of the film. It is very important to understand that film is a team sport. Remember, there is no “me” in film.

With this rule, it is very easy to understand why the people who are participating in the creation of the film need to creatively be on the same page as the director.

This particular shoot was scheduled out to take 8 hours. 4 hours before lunch and then 4 more after. The first half of the day has some of the beginning and ending shots and the second half of the day is scheduled with the cutaways and b-roll shots.

Before any of these shots can happen however, lights need to be set up. With this film, there is one major light hurdle – the day-for-night conversion. This lighting setup was a great challenge because the story needs to occur at night – it’s also somewhat advanced and typically needs to be combined with color correction in order for it to be pulled off.

Creating the best version of this lighting setup was where I spent the majority of my first hour on set. The whole scene is set here, so it makes sense to take the appropriate time to set it up properly – it will be worth it. 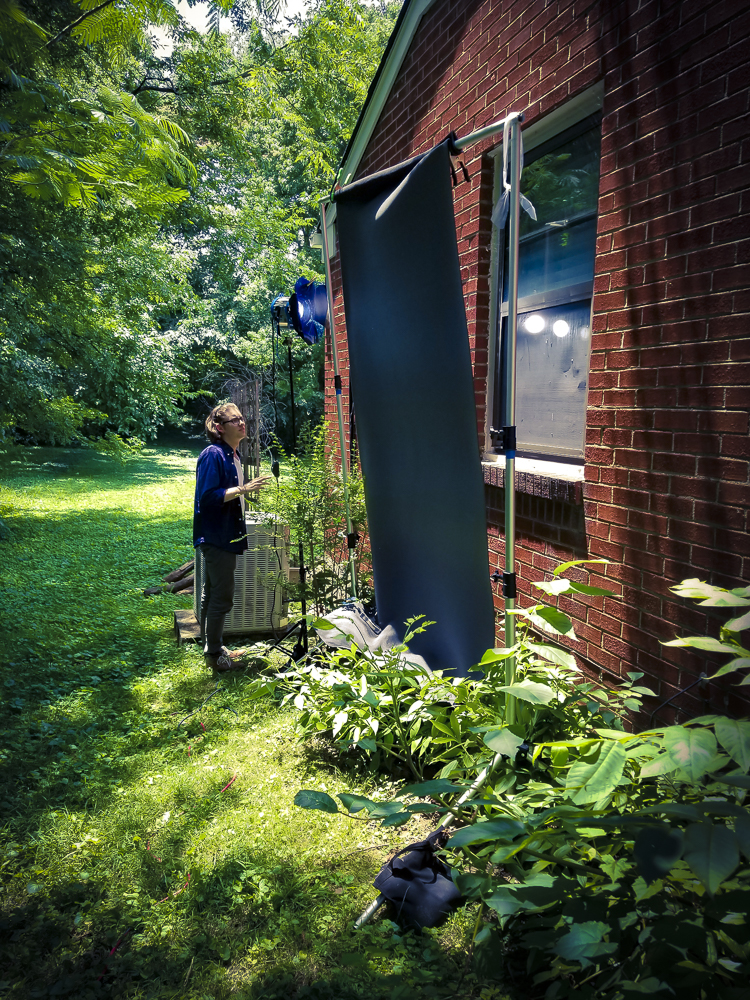 Speaking of the set, the set design in this project was just as important. The film required a bed, a clock, and a nightstand – all of these had to be placed somewhere and I owe a massive thanks to Reeve Powers for spending his first hour on set creating a “bedroom”. He did an excellent job, and great set design can massively impact the quality of a film. 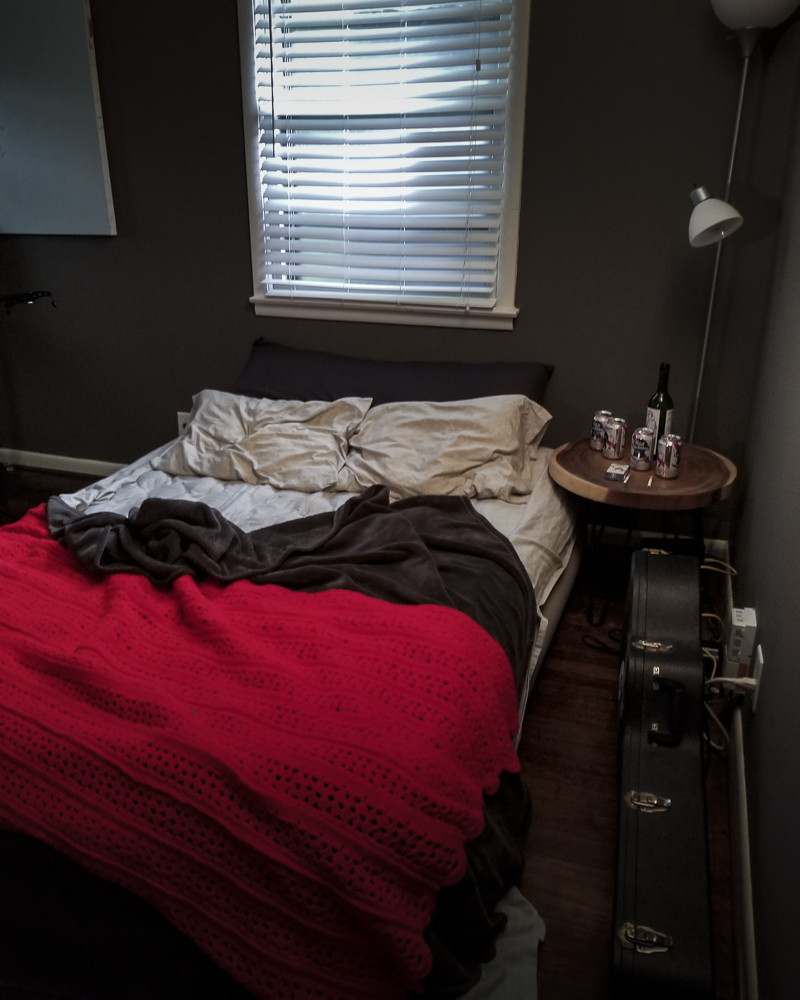 At around an hour and a half into the official schedule, we began shooting. We started with the wide shots and establishing shots of the opening montage. I used a slider to accomplish some of these and a tripod for others. 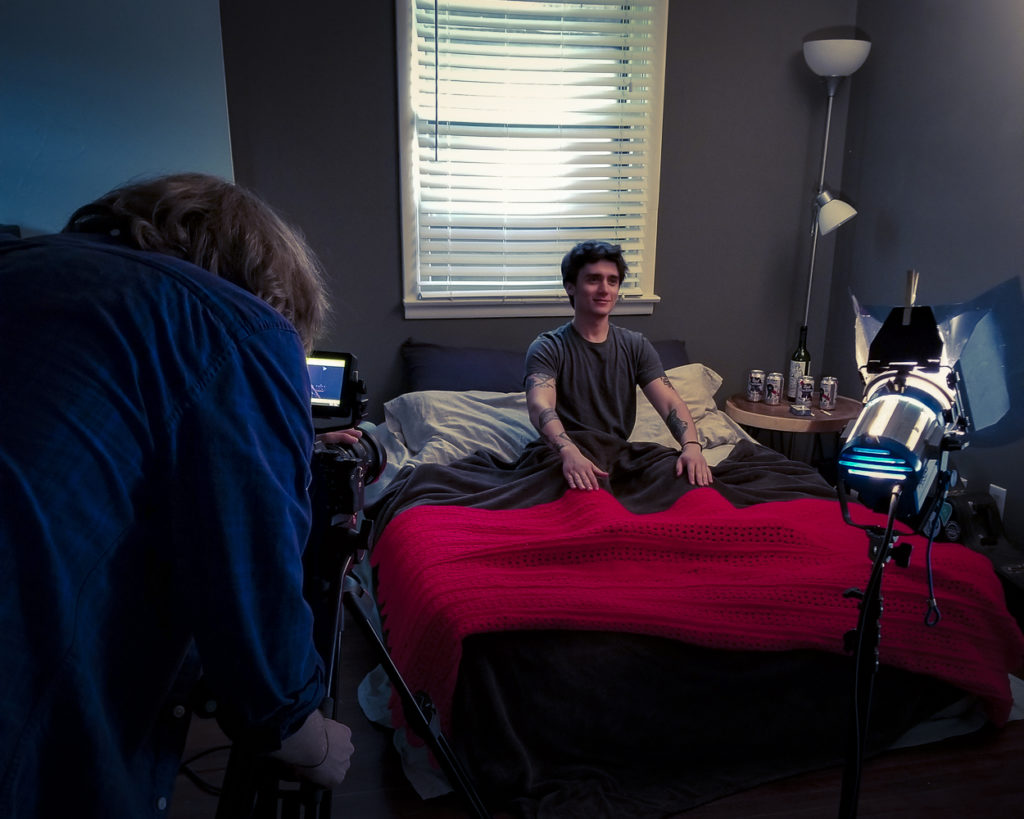 Once these were done, special effect lighting would be on the table. Certain characters or objects emit a blue glow throughout the film. For this effect, I grabbed a small blue LED and placed it in front of the actor’s face. This made a glow and gave the actor something to look at when delivering his lines.

And based off the raw footage, the effect worked.

After about two more hours, the shots involving blue light were mostly done and this means lunch. Remember, always feed your cast and crew, they deserve it.

And this is where part four of A CERTAIN WAY TO MAKE A SHORT FILM series comes to a close. The next part in this series picks up after lunch and follows through until the end of the Day of Filming.